You cannot add "Device "Spinor" - protection against mobile phones radiation" to the basket because the product is out of stock. 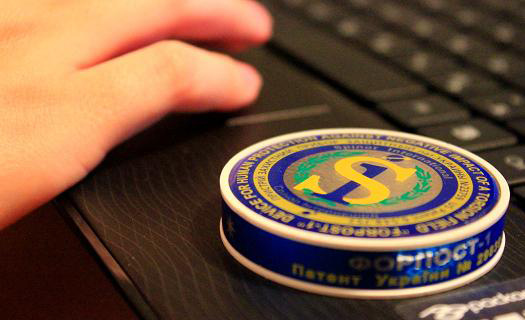 The device “Forpost-1” proved reliable and convenient means of protecting people from the negative influences of torsion or information components of electromagnetic radiation monitors of personal computers (PC), TVs and electronic equipment in general.

The warranty period for the operation of the “Forpost-1” device at least 7 years.

The device “Forpost-1” proved reliable and convenient means of protecting people from the negative influences of torsion or information components of electromagnetic radiation monitors of personal computers (PC), TVs and electronic equipment in general.

Recent studies confirm that the torsion component of electromagnetic radiation on the TV (PC monitor and electronic equipment in general) are the most significant factor in the negative impact on human health.

The continued impact of torsion component of broadcasts of televisions and computer monitors can lead to deterioration of human health and cause headaches, excessive fatigue, blurred vision and memory, and sleep disturbances. It leads to a reduced level of white blood cells and lymphocytes in human blood, and reduced immunity. There is also a negative effect on the endocrine and reproductive systems.

Most susceptible to the effects of information fields are children and pregnant women.

The device “Forpost-1” can be used to neutralize the negative impact of automotive electronics, electric trolley buses and underground trains.

Experts from the National Technical University, “Spinor International” and International University of bio-energy-technologies developed a device “Forpost – 1” to eliminate the negative influence of torsion component of electromagnetic fields (EMF) monitors of personal computers (PCs), televisions and other electronic techniques.

The device “Forpost – 1” is a kind of generator of static forms of TF and protect people from the negative influence of torsion component of EMI on PC monitors and TV screens. “Forpost – 1” consists of two coaxially placed one another concentric cylinders of the same height, the space between which is filled with polymer.

The polymeric material is disposed in the space between the cylinders, pre-exposed to a particular generator TF over time to its polymerization, allowing the implementation of the rotatable polarization of the polymer.

This process is crucial to confer protective properties of the device, albeit partially used and in their fields, coaxial between cylinders. As a result of the formation of static TF protective device greatly enhances and increases the effectiveness of protection.

The device “Forpost – 1” is a physical medium that is a combination of regular geometric shapes with mating surfaces, creating a form of static polarization of the physical vacuum, in which the latter increased significantly due to the arrangement of rotating particles of polymer or other essential part, that fills the space inside the device.

Protective device creates two straight static forms of torsion fields (TF), spreading in the form of symmetrical cones off, depending on the quantity of items with corresponding geometric surfaces.

Protective device is placed in the left TF monitor, preferably in front of him so that one end of the device to be directed perpendicular to the optical axis of the monitor. 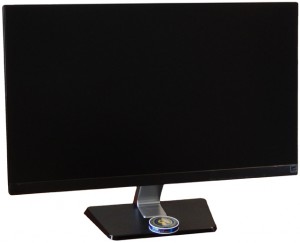 The device “Forpost-1” is recommended for LCD and plasma TVs, LCD monitors. It is placed above or below your TV or monitor to the chosen location. TV or CRT device is placed directly in front of the TV or monitor distance of a few centimeters at the level of the screen.

For neutralization the negative impact of electronics of cars is not enough to put or fixtures “Forpost-1” of any convenient for you place in front of the gearshift lever.

The device needs no power source and does not carry out any intervention in monitors, televisions and other electronic devices.

The warranty period for the operation of the device “Forpost-1” is at least seven years.

Checking the efficiency of the device “Forpost-1”

check with the help of the device “IGA-1”

The test was carried out with the help of the device “IGA-1” which is a highly sensitive measure of selective electromagnetic field. It is made of medical-ecological company “Light-2” in the town Ufa, Russia.

The first step is to determine the safety distance from the monitor to the user without the device “Forpost-1”. The size of the distance should be in the range of 50-80 cm at the different monitors.

Secondly front of the monitor according to the instructions for use, the device has “Forpost-1” a distance of 5 cm from the monitor screen. From this safe distance, “IGA-1” is fixed discount up to 10-15 cm.

Check with the help of hardware complexes “GRV-Camera”

The tool “GRV-Camera”, produced by ISR “Raster” in the town Novgorod in Russia, registered luminescence of the fingers of the human hand in the field of high’s voltage – the method of discharge visualization or so-called Kirlian effect. In these devices, after appropriate transformation of optical cable system and digital information bioenergy program stored in the computer in the form of graphs. Special programs conducted mathematical processing of received bioenergy programs allowing basic estimates of the parameters of the images to make express diagnostics and monitoring of psychosomatic conditions of people in general, as well as the “energy of their internal organs”.

The experiment consists of three parts: 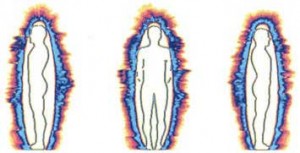 First, before beginning-only analysis is determined and fixed level of health indicators derived by applying emission test of the ten fingers, feeling in a standard way device “GRV-Camera” in the background.

Fig. 1 Human aura before the test 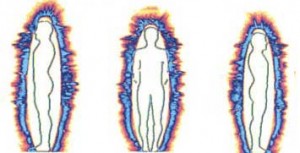 Second, the test requires work on a computer without a safety device for 10 minutes. After this time, it should re-recording with device “GRV-Camera”.

Fig. 2 Condition of aura after 10 minutes stay in front of a computer screen, which increases the value of “breakthrough” aura.

The third stage of the test requires movement from the area of broadcasting the computer monitor and handheld devices “Forpost-1” for 10 minutes. After a timeout conducted repeated recording device “GRV-Camera”.

Fig. 3 Condition of the aura after a 10-minute impact of the device that restores breakthrough in the aura.

As you can see in Fig. 2, the computer monitor has a suppressive influence on the human aura, thereby reducing the immune system of the user. But after applying protective device “outpost-1” in Fig. 3 observed recovery of the human aura, which has a positive effect on health itself. 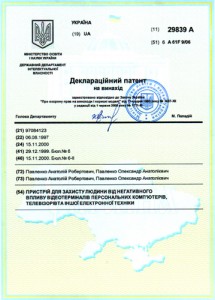 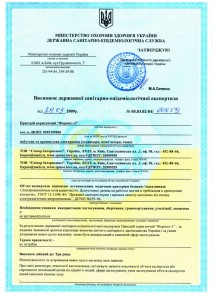 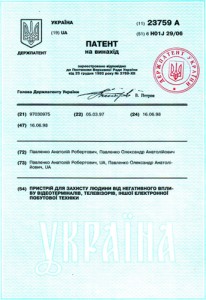 We use cookies to improve the functionality of the site. If you continue to use the site, you agree to use it.ОКRead more